The AudioAmp Extension lets you create complex sounds far beyond a 'beep' directly with the BRIX₂ platform. This allows applications such as embedded sonification or synthesizers. The AudioAmp Extension contains an optional amplification circuit, so you can not only connect headphones but also speakers directly. Above that, the module features an optional dedicated Arduino that can handle the sound synthesis, so the Base Module can care about something else.
We suggest to use the Mozzi library to generate sounds with BRIX₂.

"Currently your Arduino can only beep like a microwave oven. Mozzi brings your Arduino to life by allowing it to produce much more complex and interesting growls, sweeps and chorusing atmospherics. These sounds can be quickly and easily constructed from familiar synthesis units like oscillators, delays, filters and envelopes.

You can use Mozzi to generate algorithmic music for an installation or performance, or make interactive sonifications of sensors, on a small, modular and super cheap Arduino, without the need for additional shields, message passing or external synths."

There are a few facts that are important to know when working with the AudioAmp Extension.

The two-way solder jumpers on the AudioAmp Extension consist of a center pad and two outer pads, in the image colored in orange or light blue. You can switch the state by either putting a blob of solder between the center and orange or the center and light blue. This will later be referred to as the states OR and LB. The solder jumpers themselves will be referred to by their yellow label number (1-6). In some cases, no connection is a third, valid state. In the image, the upper dark red PCB is the top side (see the audio jack) and the lower dark blue PCB is the bottom side of the AudioAmp Extension. 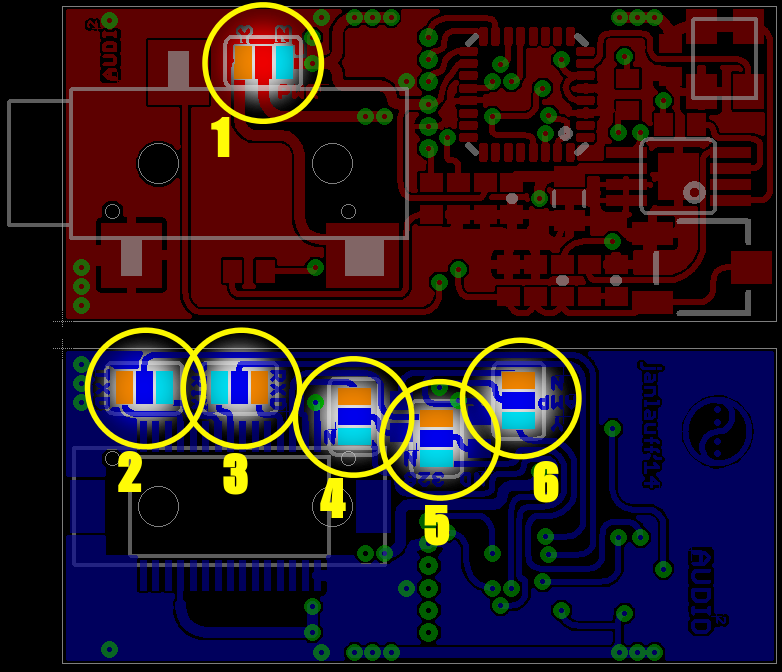 No Controller, no amplification (Default Setting)¶

The Audio synthesis has to be done on the Base Module Controller, which is basically just connected to the left channel of the headphone jack on the AudioAmp Extension just as in this schematic: https://farm8.staticflickr.com/7458/10657009473_26c1f478de.jpg, taken from http://sensorium.github.io/Mozzi/learn/output/

The default settings of the AudioAmp Extension are: Mozzi HiFi mode on pins D9 and D10, as advised on http://sensorium.github.io/Mozzi/learn/output/ . The amplification is not active by default, the audiojack (left channel) is directly connected to the microcontroller audio output circuit.

Communication with the AudioAmp module¶

Due to an error in the design, if the communication is jumpered to hardware RX/TX, the RX/TX lines need to be swapped. This means you basically have to connect jumper 2 center to jumper 3 LB and jumper 3 center to jumper2 LB. All current modules should have that fix installed.

If your AudioAmp Controller is configured to use Hardware Serial, you can just upload the >Tools>AudioAmp_Traverse sketch to your User Controller. Then select "Arduino Duemilanove w/ATmega328" as a Board and upload your Mozzi sketch to the AudioAmp Extension. Regardless if you are using a Hardware Serial or Software Serial connection to upload your sketches to the AudioAmp Extension, you need to patch your Arduino IDE (as of July 2014). > Patch beschreiben!!!! <

In order to program the BRIX2 System Controller via the Serial_Traverse sketch, you will need to patch a file (as of Arduino 1.0.4). You can follow the instructions on http://petervanhoyweghen.wordpress.com/2012/11/08/using-the-leonardo-as-usb-to-serial-converter/ or this local copy:

Locate the CDC.cpp file (arduino-1.0.n/hardware/arduino/cores/arduino) and add the lines printed in bold (a patch-file is attached to this page):

// auto-reset into the bootloader is triggered when the port, already
// open at 1200 bps, is closed. this is the signal to start the watchdog
// with a relatively long period so it can finish housekeeping tasks
// like servicing endpoints before the sketch ends
if (1200 _usbLineInfo.dwDTERate) {

// Most OSs do some intermediate steps when configuring ports and DTR can
// twiggle more than once before stabilizing.
// To avoid spurious resets we set the watchdog to 250ms and eventually
...

In order to be able to upload sketches to the AudioAmp Extension via the software serial interface, you have to

In order to be able to upload sketches to the AudioAmp Extension via the software serial interface, you have to modify a file in your Arduino directory. This has to be done only once, of course.

The file is /arduino-1.0.x/hardware/arduino/boards.txt and you'll have to add the following lines (somewhere):

After that, restart the Arduino IDE and check the Tools>Boards menu for the new entry. You should be able to select "Audio Amp Extension" as a board.

Use a compatible flash adapter to install the slow serial bootloader that can be found in the Repository at /Firmware/Bootloaders/AudioAmp_4800_Bootloader.hex.

Flash the bootloader to the chip using AVRDude:
(NOTE: Avrdude may not know this device.)

After that, set the correct fusebits:

avrdude: safemode: efuse changed! Was fd, and is now 5
Would you like this fuse to be changed back? [y/n]

In that case, just press ENTER.

And you should get:

In order to install the bootloader, connect your ISP adapter to the 6 pads on the lower side of the board.

- Headphone Jack collides with C7 during population. Had to cut away the cones on the bottom side.
- Hardware RX/TX are swapped. TX on Mozzi controller connects to TXD of User Controller. Maybe the option should just be connecting RX of the Mozzi controller to TXD of the User Controller and restrict everything to a one-way communication. But then, the bootloader is an issue. Although we can address either System Controller or Mozzi Controller by different reset lines, they still are likely to interfere on the RX/TX lines. Maybe we could put the System Controller into a non-communication-mode first.